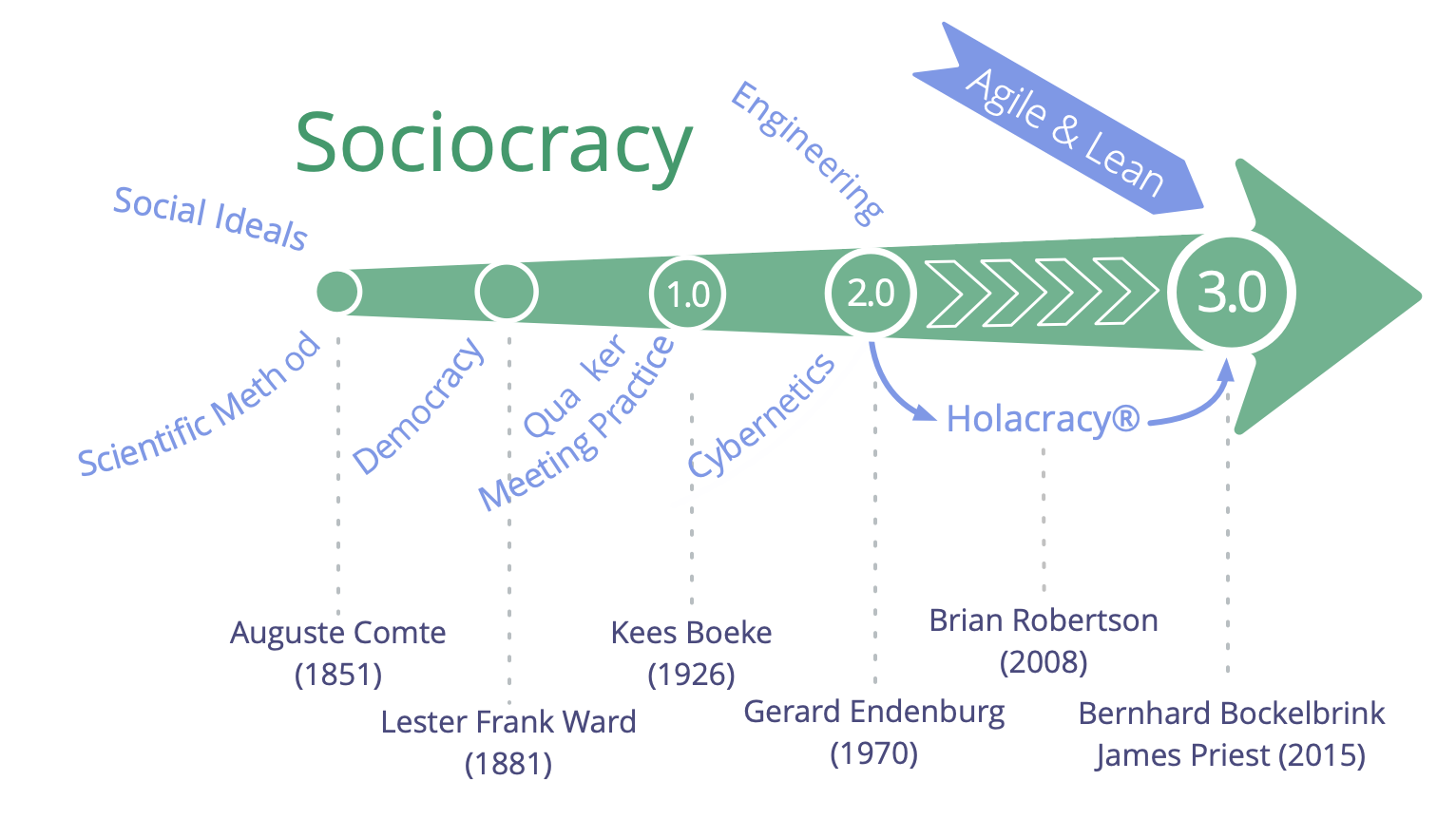 The literal meaning of the term sociocracy is “rule of the companions”: socio — from Latin socius — means “companion”, or “friend”, and the suffix -cracy — from Ancient Greek κράτος (krátos) — means “power”, or “rule”.

The word sociocracy can be traced back to 1851, when Auguste Comte suggested applying a scientific approach to society: states would be governed by a body of scientists who are experts on society (which he termed “sociologists”). In his opinion, this future, although not yet achievable, would be inevitable.

A few decades later, Lester Frank Ward, used the word ‘sociocracy’ to describe the rule of people with relations with each other. Instead of having sociologists at the center, he wanted to give more power and responsibility to the individual, he imagined sociologists in a role as researchers and consultant.

In 1926, the Dutch reformist educator and Quaker Kees Boeke, established a residential school based on the principle of consent. Staff and students were treated as equal participants in the governance of the school, all decisions needed to be acceptable to everyone. He built this version of sociocracy on Quaker principles and practices, and described sociocracy as an evolution of democracy in his 1945 essay “Democracy as it might be”.

Gerard Endenburg, also a Quaker and a student in Boeke’s school, wanted to apply sociocracy in his family’s business, Endenburg Elektrotechniek. He created and evolved the Sociocratic Circle Organisation Method (SCM) (later becoming the “Sociocratic Method”), integrating Boeke’s form of sociocracy with engineering and cybernetics. In 1978 Endenburg founded the Sociocratisch Centrum in Utrecht (which is now the Sociocratic Center in Rotterdam) as a means to promote sociocracy in and beyond the Netherlands. Since 1994 organizations in the Netherlands using SCM are exempt from the legal requirement to have a worker’s council.

During the late 1990s and early 2000s, several non-Dutch speaking people came across sociocracy, but it wasn’t until 2007 when Sharon Villines and John Buck launched their book, “We the People”, that sociocracy became widely accessible to the English speaking world, and from there has began to migrate into several other languages.

Sociocracy has proven to be effective for many organizations and communities around the world, but it has yet to become viral.

In 2014 James Priest and Bernhard Bockelbrink came together to co-create a body of Creative Commons licensed learning resources, synthesizing ideas from Sociocracy, Agile and Lean. They discovered that organizations of all sizes need a flexible menu of practices and structures – appropriate for their specific context – that enable the evolution of a more sociocratic and agile approach to achieve greater effectiveness, coherence, fulfillment and wellbeing. The first version of Sociocracy 3.0. was launched in March 2015.

Liliana David joined the team soon after. Together they regularly collaborate to make S3 available and applicable to as many organizations as possible, and provide resources under a Creative Commons Free Culture License for people who want to learn, apply and tell others about Sociocracy_3.0.

As interest in Sociocracy 3.0 grows there is a fast growing community of people from a variety of backgrounds — pioneering consultants, coaches, learning facilitators, and people applying S3 into their various contexts — who share appreciation for the transformational potential of Sociocracy 3.0 to help organizations and their members thrive. Many kindly dedicate some of their time to experimenting with and sharing about S3, and who collaborate to learn from one another and document experiences to inform the ongoing development and evolution of the S3 and its various applications.