Utilize your limited time and resources wisely by testing if arguments qualify as objections and only acting on those that do.

When someone raises a possible objection (an argument for changing something) check that the argument reveals how leaving things unchanged will – or could – lead to consequences you want to avoid, or that it informs you of a worthwhile way to improve how to go about achieving your objectives.

Explore and refine each argument as necessary to identify any misconceptions or misunderstanding, and to eliminate aspects of the argument that are based merely on assumptions, or a personal preference or opinion. If you establish that what remains of the argument qualifies as an objection, then go on to resolve the objection.

To have a productive dialogue, it is helpful to understand that any argument is made up of a series of claims: Each argument contains one or more premises, which are offered as reasons for accepting a conclusion.

Each of an argument’s premises can be scrutinized individually, and when that is done, we can analyze whether or not the conclusion that follows from those premises stood up to the test.

It helps to present the argument in a way that makes the premises and conclusion, obvious, e.g. like this:

Facilitator: invite the group to list the premises and explain the conclusion, and then take it from there.

Sometimes it can be helpful to record this information on a flip chart or a digital whiteboard, or even as text in a chat.

With an argument laid out like this, the group can focus questions to understand the argument according to each specific claim, and point out any claims with which they disagree. Each disagreement can be presented using the same method as above.

When a premise has been agreed upon, mark that as done, when the dialogue reveals a hidden premise, simply add it to the list. If a premise turns out to be invalid, remove it. Recording progress in this way helps to ensure that everyone is on the same page with the current state of an argument.

When agreement seems out of reach: In a group setting, it may at times turn out to be impossible to immediately resolve a disagreement about a specific claim relating to a possible objection, often because the group lacks data, knowledge or expertise. When such a situation occurs, one way to deal with it is to re-frame the possible objection around that specific uncertainty. If the amended argument qualifies as an objection, it can then be resolved by amending the proposal with an added provision for establishing the facts about the controversial claim.

A process for testing if an argument qualifies as objection

This process for testing if arguments qualify as objections, is a variation of the Reasoned Decision-Making pattern.

Step 1: Present the argument being put forward as a possible objection.

Step 3: Check if there is any disagreement with the claim that the argument qualifies as an objection (e.g. people can indicate with a raised hand). The reasons for the disagreements are presented in the next step.

Step 4: Investigate the reasoning behind the disagreement:

Step 5: Integrate the information revealed in the previous step with the original argument: 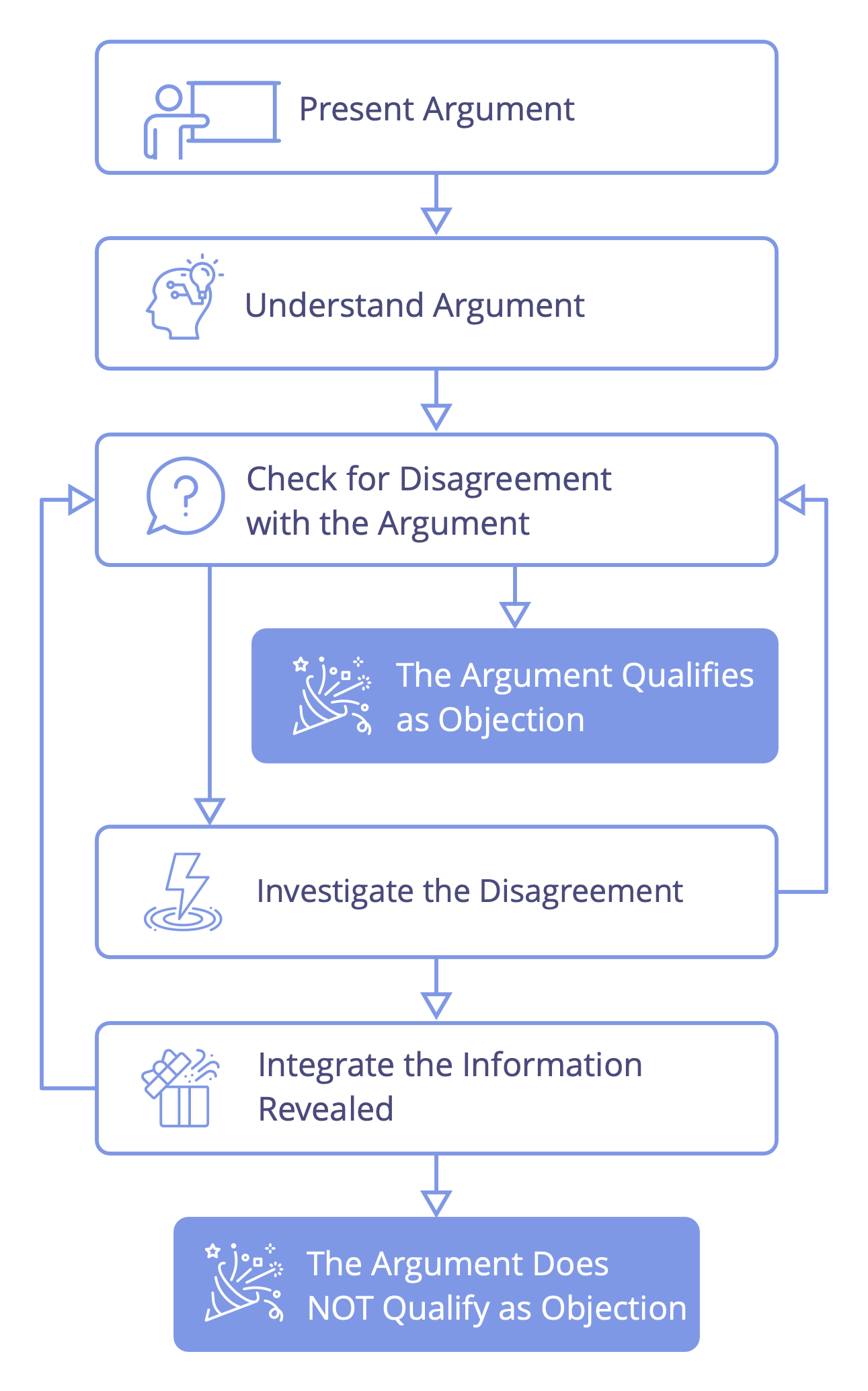 Below you’ll find more guidance on how to go through each step. As with all patterns in S3, your approach to testing if arguments qualify as objections can be adjusted to suit your context.

Present the argument being put forward as a possible objection.

Facilitator asks the person with the possible objection: Please explain your argument.

Ensure everyone understands the argument.

Facilitator asks everyone: Any questions to understand the argument?

Everyone: If you don’t understand, jump in and ask a clarifying question. The person presenting the argument explains further, until everyone understands.

Step 3 Check for disagreement with the argument

People consider the argument and then indicate if they disagree.

Everyone: reflect for yourself if you think the argument presented qualifies as an objection or not.

Note: If a group is new to the process, the facilitator might explicitly invite everyone to reflect for themselves: Do you think this argument qualifies as an objection?

Facilitator asks: Does anyone disagree totally or in part, that this argument qualifies as an objection? If so, please raise your hand.

Step 4: Investigate the reasoning behind a disagreement

Choose one of the people with a raised hand and using the same process for testing arguments qualify as objections, determine if their reasons for disagreeing are valid or not:

4.1. Present the reason for disagreement: Facilitator invites: Please explain why the original argument is totally or partly incorrect.

4.2. Understand reason for disagreement: Facilitator invites: Are there any questions to understand this argument?

Step 5: Integrate the information revealed in the previous step with the original argument

Facilitator asks the person who presented the original argument: “Anything remaining of your argument?”

The person who brought the original argument has the option to refine, rephrase or reframe their argument, or to drop it entirely, if there’s nothing remaining. 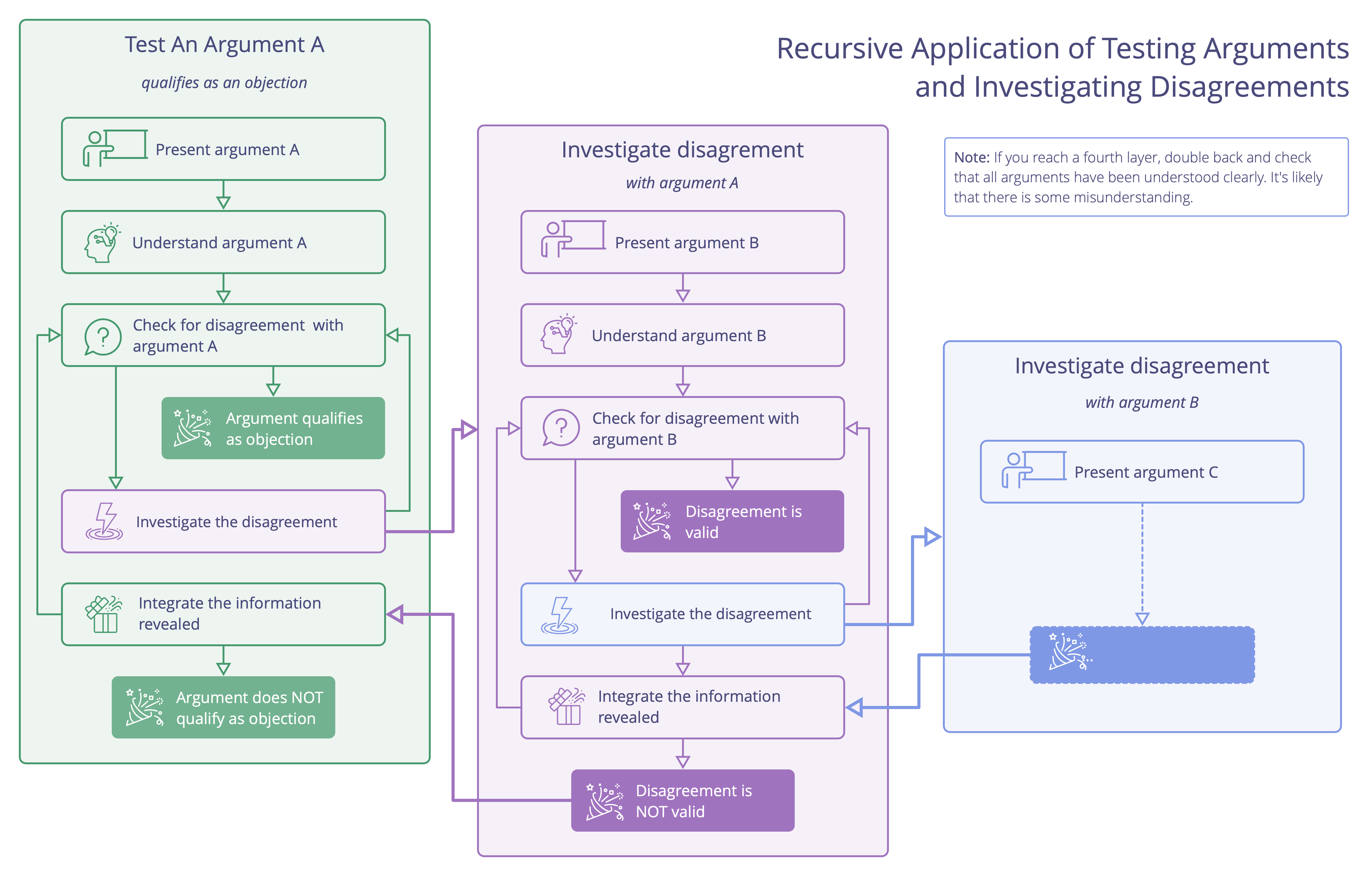 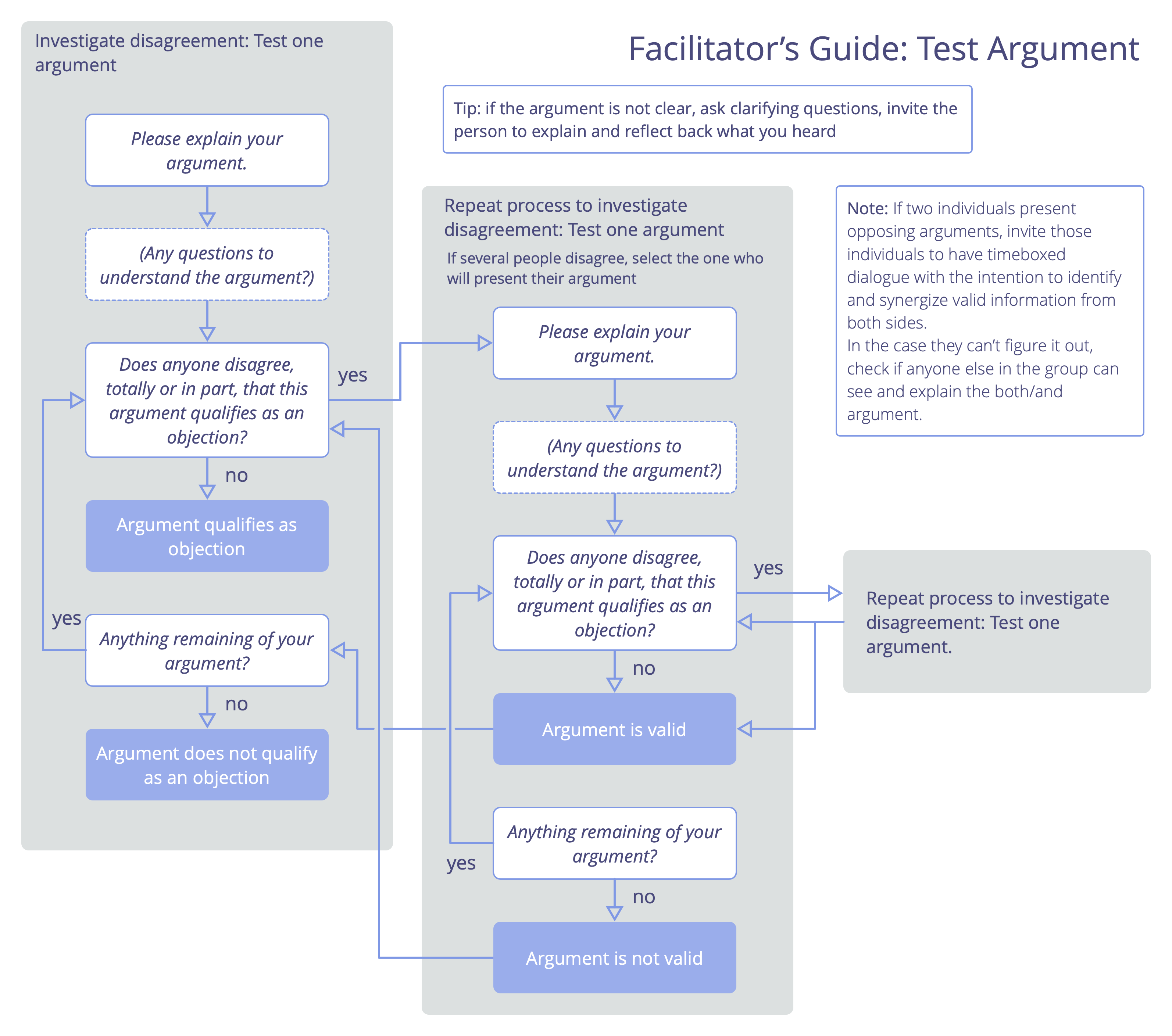